Ah marvellous! that was the first place I looked when I first upgraded, wondered why there was nothing in there! Great, will play with that today

I don’t suppose it’s possible to not make every map marker plan a route when clicked is it?

Take this screenshot for example, if you have any map markers and you click them, the route is drawn regardless of having either of the 2 hub controls hidden, so there’s no control over having a route drawn. It just happens whether you want it or not.

It’s great, don’t get me wrong! I really like it and I do need it, it’s just that there’s no control over that aspect of the routing so it’s plotted every time. For me, and possibly other users, you may not want the route to be drawn every time when a marker is clicked. You’d need to control when you actually want to draw the route.

Also, what happens if you have those 2 options on the map to hide the Map Input & Route Instruction but then you want to make them visible again at some point during your app? It’s not possible right? You have remove the map and re-add it again?

Sorry for late response here, let me check this out and provide the answers.
Thanks.

No problems, thanks very much.

what happens if you have those 2 options on the map to hide the Map Input & Route Instruction but then you want to make them visible again at some point during your app?

Thanks for suggestion regarding this question, we added the new action Toggle UI Controls Visibility in order to get a better control when you want to display the UI or not.

I don’t suppose it’s possible to not make every map marker plan a route when clicked is it?

This has also been fixed with the latest update.

Please check the latest version, update the app and give it a try.
Thanks.

Thank you very much, I’ll play with those a bit later on, that should fix a few things up for me. I do have one more suggestion for you Dumitru, but I don’t want to push my luck! I’ll test these out and explain later, it’s simple to add and should make all the difference.

Apologies for not getting back to you sooner but I’m currently in the middle of a house move so things have been busy for me recently and as such, haven’t been able to spend as much time on this as I’ve wanted. But that aside, here’s some feedback for you and some additions which would not only be useful to myself but for others also I hope.

So, the previous change to toggle the UI controls works as expected, except if you try to run the action when both tick boxes are unticked in the first instance, it doesn’t work. One of them needs to be ticked to start with and then they can be toggled. Minor thing really but just thought I’d point it out. I just load the map with the UI Route Instruction ticked and the UI Map Inputs unticked and then toggle the controls straight after, you don’t see them appear anyway so it’s fine.

The map marker click is no longer just automatically plotting the route, so that’s good, thank you.

The other thing I mentioned before, and I hope it’s not out of scope, would be to add an event called “A MapBox Event is Fired” and have a couple of the more popular events available to select in a dropdown which people might want (I say people, I mean me)

I would think if anyone wanted the ability to run an action when an interaction with the map happened, it would more than likely be some map drag or click event. If this gets added in the future, it shouldn’t interfere with the click of a map marker and once in place, more events could easily be added in the future if requested.

Action to remove a drawn route on the map (which gets displayed using the “Set Directions” action).
Action to draw the route rather than having it happen automatically when the “Set Directions” action runs because it can really take some time before the route is drawn sometimes and it’s annoying I have no control over it.
Does the Start Location Tracking action have a hardcoded zoom being set behind the scenes? If it does can you make it configurable?

Now the sad part… probably out of scope though
Whilst I’ve been trying my hardest to use the Mapbox GL-JS plugin to support an application which utilises sat-nav type features, there are 2 major things I’ve come across which are almost making me reconsider what I’m trying to do. I don’t think it’s possible for you to fix either of these due to how the JS version works. The correct way would more than likely be for me to use the iOS/Android versions of Mapbox which of course isn’t viable as a Bubble plugin! But… I’ll mention them anyway!

So, the biggest headache is that every time you move the map, zoom the map etc… it wants to download a part of the map. Whilst this isn’t so bad if you’re using it as part of a web page, it isn’t great when you’re trying to create a web app that acts like a normal app and having a sat-nav type of app act like this every time just makes it unusable. It can actually be terribly slow at times but I understand the JS version is probably not the best version to design such an app with, especially when I’m trying to do all of this through a phone using iOS/Android… that’s why the iOS/Android versions of Mapbox exist I guess.

If it were possible to somehow make the map available offline using browser storage then that may solve a few things but technically I don’t know how, or even know if such things are possible using Bubble plugins, especially one like this.

The other thing is the state value you set called “Heading” it never populates and I don’t know why.

Before the update to use v1.4.0, I noticed it slowed down quite substantially.
Whilst Mapbox seem to be busy pushing new versions (currently at v1.6.0) they’ve made some changes to how vector tiles render which I hope will increase speed, some safari web worker/caching changes in v1.5.0 and quite a lot of other things. I’d love to play with the latest version to see how all these perform. I’m almost using all the actions now in the plugin so I can test it just by using what I have so far if you could push an update to use v1.6.0.

Thanks again for everything you’ve done so far.

Just to comment on my own essay above, and filter out most of my waffle…
Speed is no longer an issue now that I know how to use custom styles correctly

I’m full of bright ideas for this plugin hence the updates I keep making! Not expecting them to be implemented anytime soon as I know they’re not on your priority list but this post is turning into my “don’t forget list” so will keep it updated anyway.

Thanks for feedback and the compact read

We’ve seen the issues, the requested features and will work on in foreseeable future.
Thanks for support and understanding.

Ok, no probs, thanks very much.

We’ve made a run through the feedback provided, so we pushed an update to plugin.
Please upgrade the plugin, refresh the app and give it a try.

Action to remove a drawn route on a map (which gets displayed using the “Set Directions” action).

Action to draw the route on a map (this will give a little more control over wen you want it).

There is an action Set Directions, which can used.

Start Location Tracking - is it possible to add a zoom parameter to this action?

This was added in latest update.

Track a specific user? can this be done given that user has Lat/Long cords?

It should be possible to do using workflows with plugin’s exposed states (like current lat and long possitions).

State - Heading, why doesn’t it populate?

This is only populates on phone’s GPS usage.

Add option into the Add Map Marker action to disable the popup. If you leave the description field empty then it still pops up everytime you click, it just nothing in it.

This was added in latest update.

Available states for a This Mapbox Map contain lots of good information but none contain the actual Marker ID. If you can add that in, we can then do things like Do Search where User’s unique ID is This Mapbox Marker’s ID (if using the unique ID for the marker that is) - just makes it a lot easier to do user related things when triggering the ‘when map marker is clicked event’ as we can reference the Marker ID then. In fact, I think right now, it’s virtually impossible to find a user without it and that’s an issue!

This was fixed in latest update, the “Marker ID” state should work as expected.

Thanks for patience and understanding!

That is fantastic news, can’t thank you enough, it will surely make this plugin a lot more useable.
Thanks again!
Paul

Here are a few feature requests in order of preference. It would be great if some of these could make it into a future release.

Use mapbox-gl-draw to draw a polygon and Turf.js to calculate its area in square meters.

3. Multiple Waypoints
As described by @pork1977gm at the start of this post

4. Marker Rotation
Add the ability to rotate a single marker’s orientation based on a number field in the database. This would be used to show the direction of travel of a vehicle at a particular point in time.

Drag the Marker to a new location on a map and populates its coordinates in a display.

6. Get Co-ordinates of mouse pointer

Get coordinates of the mouse pointer

Showing mouse position on hover with pixel and latitude and longitude coordinates.


At the moment I can only display the lat and long if I click on the map. Ideally it would update as the mouse moves over the map 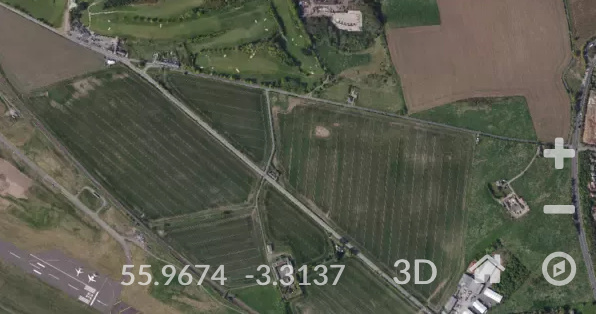 Drag the range slider to adjust the opacity of a raster layer on top of a map.

8. "When Mapbox 's Bearing Is"
Add mapbox bearing (the map orientation that can be set in actions) to this list.
Purpose: I would like an icon to increase in size when orientation is not zero so the user knows they can select this button to reset the map back to north alignment. 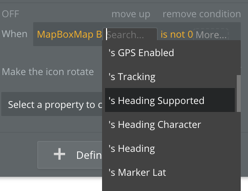 Thanks for feedback! We appreciate it, while can not commit right now on the availability of the requests we’ll walk through the request in order to see how and what is feasible to implement in short term and long term perspective.
We’ll provide an update on the matter, once we’re ready for implementation asap.
Thank you for understanding