Hi all
I’m using the Uplance template and have had problems with it from the start regarding the Stripe.js plugin. In Wordpress-style fashion it appears that updating the plugin breaks the site. When it did this, I was able to rollback the plug-in to a previous version (1.8.10) and the issues seemed to disappear, however when navigating to the ‘Employer’ page to edit it just today, 20 issues suddenly appeared and I cannot seem to remove them no matter how far I roll back.

I wanted to create a new ‘app’ with the uplance template to refer back to and see what has changed, but Bubble won’t let me do that because the template is already in use

Is there a way I can look at a fresh copy of the Uplance template so I can re ‘code’ those broken elements?

What have other people done in this situation? I don’t want to have to pay for someone to fix something when I could do it myself. If only I knew what I needed to do!

Sorry for the trouble.
Regarding starting anew, you can create another application from template and try matching the elements which have missing values from new application to your current one if those elements are same.

Also a good recommendation is to have a version control for the application - https://manual.bubble.io/maintaining-an-application/version-control

I’m unable to create another application using the template, as it only allows me to use the template on one app at any time.

I have been doing version control (literally every minor change) however upon going back to older versions the issues continue to pop up, even though they weren’t there just yesterday. I’ve been working on this app for days, weeks, months and I haven no idea how they just appeared.

Any other ideas? I have invested far too much time in this app to yet again start over.

The Live version I have from 2 days ago doesn’t seem to have that problem. Can I simply start editing that version? It will wipe out the last 2 days of work but perhaps that’s better than trying to fix these random errors.

There is no limit on the number of applications the template can be used for. (Template Policies)

By creating new application from template, you’ll have the working workflow logic which can used as reference to make fixes to those issues which had pop-uped in the application.

If you encounter trouble with framework itself you could report it to bubble : bubble.io/bug_report so they could take a look why something like version control does not work as expected.

I’ve managed to reduce the issues down to just 7. This is the problem I have now but don’t know how to fix it. On the ‘Employer’ page of my app (which I renamed to Event Manger’ when I go to: Group Container > Group right container > Group user > Group user (second one) > Group User card information > … there is a Group Missing value

In the original app version it’s called “Group Retrieve a customer sources data” but I cannot seem to fix the new app back to that state.

I am certain the Stripe.js plug-in had something to do with it. It seems that in me upgrading the Stripe plug-ins (there are two of them so I’m not sure which was responsible) it changed this value and now I cannot change it back.

It’s the only thing now from stopping me from finally publishing my app and going live, so I’d be willing to pay someone to sort it out. All of my remaining issues are due to this "Group Retrieve a customer sources data problem!

The annoying thing about this? The issues were HIDDEN until one day I clicked on that page to edit it, then they suddenly appeared without me making a change - just going to that page revealed the issues. That’s why it’s been difficult to rollback, as the issues were there from a time I updated Stripe but were not posted in Bubble immediately as issues until going to that page which I only did some time after.

This template should come with strong and clear guidance not to update the Stripe.js 2 plugin past version 1.8.10 or it breaks the site.

Thanks for any help, if anyone can help?

Thanks for feedback. Let me jump in here to help you. This issue shouldn’t be related to Stripe upgrade, but you could try to set it to version 1.7.1 as this is the current version in our template. Also, make sure whether you have both plugins in your editor and they are configured properly.

You should be able to select the sources data from this dropdown: 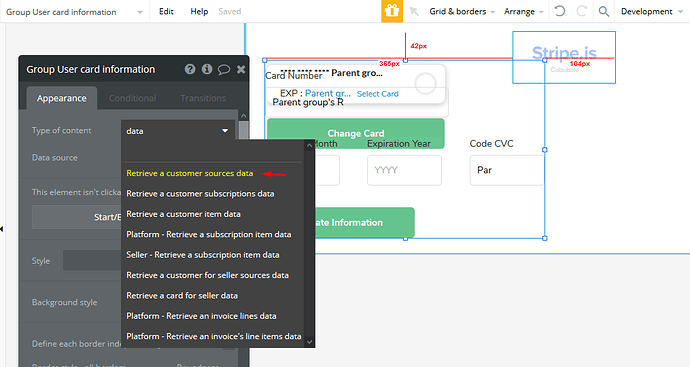 However, if you still experience this issue, please go to Settings - Collaboration tab within your editor and add our [email protected] account to your collaborator’s list.

Note: avoid the warning message regarding plan, as we are an agency and you can easily add us to your collaborators.

We’ll investigate it inside your app and get back to you with a feedback asap.