I am trying to make a list of changes using the workflow in bubble.

I want to achieve what is on this screenshot:

So basically calculate the variable :

and substract it from the value of:

However when I execute it, Bubble does:

When I try to use the MathjS A’s Evaluate(B*C) so I substract it from (A ) It does not give me the option of Input QTY etc after the expression as in screenshot: 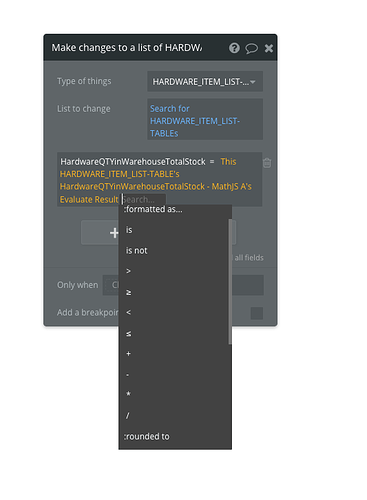 Is there a way around it?

Thanks for reaching out.

So basically calculate the variable :

and substract it from the value of:

However when I execute it, Bubble does:

You can easily accomplish this with the help of our plugin, because Bubble is not that good with BEDMAS.

The only thing you need to do is setting the formula properly.

In this case, let’s say that A, B and C are 3 different input elements. The formula will look like this (if you display the result in a Text):

Where MathJS Multiply Result is the multiply operation between B and C:

So, to showcase, this is how it looks like:

Hi Alex that works ok for static expressions but how can put it inside search results?

May I explain a bit more in detail.

Let’s say I repair mobile phones and I want to keep a record of how many screws I have in the warehouse.
So I have one table that lists the screw names and qty in stock:

Also I have a table that states how many screws are used per phone:

Finally I have a table that records mobile phone sales:

Now I need to make a Workflow as such:

Then the same workflow will carry on and update the next screw used in that day and it would be the 20mm screws.

Makes sense? Can I do that with Math.js basically use it inside the same workflow( not separate )?

Thanks for feedback. Sorry but custom implementations help are beyond our support services, unfortunately. The plugin works as is, and you can easily implement it in any workflow you prefer, based on your app requirements. There are no limitations in terms of when to use the calculation, but just make sure to perform it properly.